Welcome to my Beast Quest page where I will write about Beast Quest a series of books written by Adam Blade, I will also write about his side series, chronicles of Avantia.

Beast Quest is a series of books written by Adam Blade who is currently also writing Sea Quest. I read the first book in the series of 90+books. It’s called Ferno the Fire Dragon. Tom is living with his Aunt Maria and Uncle Henry after both his parents were declared dead. His village is mysteriously getting burnt crops and huts. He has to travel to the King and find out what is happening. It is revealed to Tom his Father was a Master of the Beasts and that there were 6 beasts in Avantia who were enchanted by an Evil Wizard called Malvel to disrupt Avantia! Tom is sent to reverse the spell with unexpected companions, Elena and Silver but even the it seems almost impossible to free Ferno…….

I loved this book because of the great characters. My favorite was Tom because he was courageous and tried hard to succeed where others had failed. Aduro was an awesome character as he could make amazing armor and was a wizard trying his best to protect Avantia!

This Book had great descriptions and cliffhangers at the end of every book! The words used as onomatopoeia like “BOOOOM!” or “BANG!”  Made the story more enjoyable. The
descriptions gave a great feel to the story like “As hard as toughened leather”

There was a great moral to the story which is to never stop losing hope and to try, try and try!

I recommend this book to people 7+ because sometimes kids might not understand some words. I would rate this book 11/10 dragons! 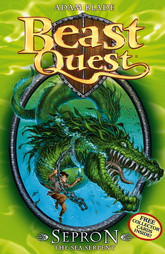 Sepron the sea serpent is the 2nd book in the Beast Quest series. Tom is now journeying to the west, as Aduro instructed him. When a huge flood arrives in the western fishing villages and fishermen keep disappearing from the ocean. Tom finds out that an enchanted beast called Sepron is the cause. When Tom and Elena have to stop Sepron they need all the weapons they’ve got.

The descriptions of Sepron were very good and I could visualize what happened clearly. The characters had good personalities and you can picture how they feel! Even the landscape was described beautifully such as “mounds of mountainous rocks”

The moral of the story was to use your intellect to do something challenging!

I would recommend this book to 7+ as it has scary themes. I am really enjoying the series so far! I would give this book a rating of 10/10 serpents!