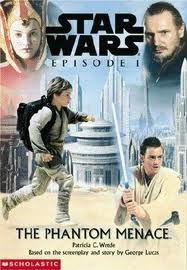 Star Wars The Phantom Menace is about the planet Naboo which is invaded by droids so Jedi knights, come to help. Qui-Gon-Jin and Obi Wan Kenobi come to Naboos help but both Jedi sense a disturbance.

I really like this book because of the great described characters and the crazy ideas of aliens and planets. The moral of this book is trust your instincs because Obi-Wan trains young Anikin Skywalker to be a Jedi even if he is to old to become one.

I recommend this book to 9 and up because there is some violence. 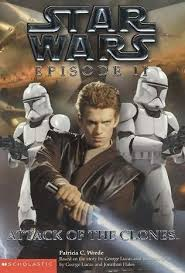 Star Wars The Attack Of The Clones is about a Jedi Count Dookoo betraying the Jedi Council and turning evil. He then causes havoc to the city of Corosant which causes a chaotic war called the Genoshian War. The Jedi now has to make copies of soldiers called Clones to fight the war.

I like this book because of cool idea of clone soldiers and the well discribed battle of Clones and Genoshians who are aliens. The moral is if there is a fight don't make it worse because the Jedi make the war worse.

I reccommend this book to 9 years and up.

Star Wars Episode 3 is about Chancelor Palpatine using order 66 which means ordering clone troopers to kill all the Jedi on missions. The Chancelor persuades one of the best Jedi Anikin Skywalker to become evil. He then tries to kill his master and friend Obi-Wan-Kenobi. Will Obi- Wan die?

This book is my favourite out of the series because of the fight and the war between Anikin and Obi-Wan the well discribed character help me put an image of the war. There is no moral to this story.

I recomend this book to 9 and over 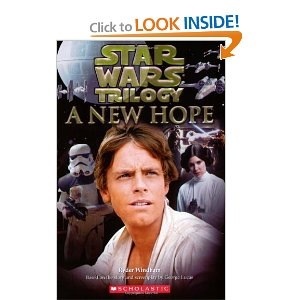 Star Wars Episode 4 is about Luke Skywalker living on a farm with his grandfather Owen Lars and Beri Lars in Tatooini. He then meets a mysterious man named Ben Kenobi. He takes Luke to his hut and brings a light saber out and then tells him that his father owns it. Then Luke now wants to be a Jedi like his father. He then goes to a bar and meets a man called Han Solo, to rent a ship to train as a Jedi. Meanwhile a myserious new sith lord is formed... Darth Vader.

This book was an awesome book it hade lots of suspensful parts like when Luke learns he had a sister. This book had no morals to it but I loved it.
I recommend  this book to 9 and up. 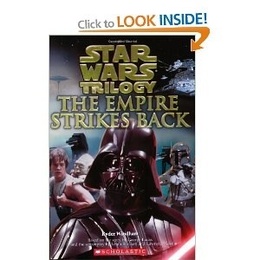 Star Wars Episode 5 is about Luke Skywalker, Han Solo, Ben Kenobi, Chewbacca and Princess Leia joining the Rebel Alliance to defeat the evil Death Star which held all the army of Darth Vader and the mysterious Emperor. Luke and his friends hide in a battle station along with the Rebel Alliance in the icy planet, Hoth. Darth Vader forces his army of storm troopers to destroy the station but they fight back it was tough but they manage to fight back the storm troopers and their dreaded vehicles. Now Vader wants revenge, he unleashes the full power of the Death Star he destroys the planet Alderan home of Princess Leia. Luke is now fighting back but suddenly gets lost in a strange planet of Dagobah were he meets Yoda a little green elf like creature. Yoda was very powerful with the force and a Jedi he trains Luke to become a Jedi Knight like his father. In the Death Star Luke battles Darth Vader, he then learns the truth about Darth Vader and who he is. Find the end by reading this book.
I like this book because of the awesome battle of the Death Star and the Rebel Alliance. This book was well described and the pictures help give a picture in your head. The moral was never give up because Luke he never gave up when Yoda was training him and also the battle between him and Vader he got his hand sliced but stilled battled until his friends came.
I recommend this book to 10 and over because there was some scary parts. 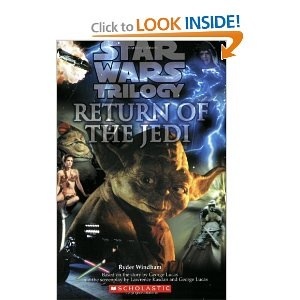 Star Wars Episode 6 is about the new Jedi knight Luke Skywalker he trained and now he became a Jedi. Luke sends his 2 droids C-3PO and R2-D2 to talk to Jabber the Hutt so he can release Chewbacca, Princess Leia and Han Solo. As Luke tries to save them Jabba the Hutt sends all of them to the desert in Tatooini and makes them jump into a giant monster with a big beak and lots of tentacles but Luke makes his escape with the help of his friends and go to General Ackbar's ship to talk about and plann how to attack the new and better Death Star.
I like this book because of the action and the story line the action was great because it had lots of suspense and shooting and the story line was always exciting and I could not put the book down. The book had lots of morals like never give up as destroying the Death Star was tough for Luke and the Rebel Alliance.
I recommend this book to ages 10 and over
Powered by