This is an entertaining book written by Thomas Rockwell. It has a bright cover and is a medium-sized book. It is a hilarious story about a boy named Billy who has to eat 15 worms in 15 days because of a bet made by Alan and Joe. The bet is if Billy can't eat 15 worms in 15 days, Alan won't give Billy $50. So, Alan, Joe and Tom go to find worms for Billy to eat. They end up finding earthworms (night-crawlers) in manure. They capture 15 of them and either boil or fry them for Billy. They could also make worm sandwiches and Billy would get ketchup, mustard, lemon, cheese or cinnamon to eat with the worms. Eww! Alan and Joe try to trick Billy into not being able to eat the worms because Alan is scared he won't be able to get $50 from his bank. Will Billy be able to win the bet?

The main character is Billy because he's the one who eats the worms. His best friends are Alan, Joe and Tom. All of their parents are part of the story too, but the book doesn't really talk about the parents that much. Billy would nearly eat anything and that's how the bet started. Tom is on Billy's side and encourages him to eat the worms. Alan and Joe are the ones trying to make Billy not eat the worms.

I loved this book because it grabbed me when I read the first chapter. I have never read a book about someone eating worms, so that's why I chose this book to review. It really is just about the bet Alan and Joe made up for Billy to eat 15 worms in only 15 days, and Alan will give Billy $50 if he does it. I definitely recommend this book to ages 9 and up. This awesome, gross book deserves 10 out of 10 stars! 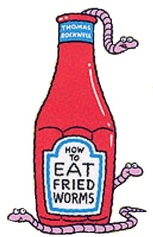