Diary of a Wimpy Kid: the last straw 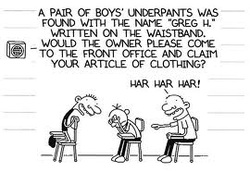 Did you know that greg's dad (Frank) actually thinks he can toughen up Greg but it doesn't really work out for him even if he tells him to do sports or other manly stuff.But when his dad threatens to send him to Spag Union (military academy) where he goes to the 7th grade, so Greg realizes that should he shape up......or get shipped out.

Greg try's to improve himself but not his family, because it's like there still doing the same thing in the other years, or just getting in trouble, like when his mum is eating chips to loud or when his dad said his going on a strict diet he just try's to go to the garage without anyone knowing but Greg feels like somebody's hiding and he caught his dad stuffing himself with brownies desperatly like he always does. At the dinner table manny says that he is a grown man and he throwed his favourite binkie away in the bin right infront of his parents, they claped but manny desperatly dug through the garbige and sucked on his binkie, his parents weren't happy.

He told his mum the billionth time to stop eating the chips so loudly ,but his mum made a good point she shouted "nobody can be as perfect as you Gregory" so she went back to eating chips loudly, his mum said that she will go to the jim to excersise but she spent the whole time eating chips and watching TV. Greg says Rodricks resolution list should be half a mile long, so he Greg decided to do this program called three strikes your out. The basic idea is that if Greg see's Rodrick messing up he will mark an X on his chart, Rodrick aiready got three X's he was about to explane to Rodrick what your out means but Greg didn't have the chance to say but instead he got three pucnhes.

I really like this book and I rate it 10/10 because it's a really funny and cool book and I recommand it to 8+ ages This is the Third collection of all 10 of them so get the full collection and do whatever you want with them like making book cases to keep the whole collection of books. So ENJOY!!!