This book is an entertaining spy story written by Deborah Abela. It is a thick book because there are two stories in one book! The first story starts off with Max Remy. It's the holidays and she has to spend her holidays at the farm in Mindawarra with Uncle Ben and Aunty Eleanor for six weeks, because Max's mum is busy with her job. She meets a new friend named Linden, he is the next door neighbour. Max decides to use Uncle Ben's new invention to travel to London, with Linden, to find Uncle Ben's brother, Francis. In the second story, Max and Linden get an email from Spyforce, saying that Max and Linden need to come to a meeting for a mission in London. They want to use the same machine to get them to London, but Uncle Ben and Francis have broken it apart and are starting it from scratch.


The main character is Max (Maxine) Remy. She is a normal girl who spends most of her time writing spy stories of Alex Crane, her made up character. She doesn't have friends at school, she used to but she kept moving schools and she ended up having none. Max's mum works at a major TV station. She doesn't pay much attention to Max because she is too busy with her work. Max's mum and dad divorced and Max lives with her mum. Aunty Eleanor is Max's mum's sister. She is married to Uncle Ben and they live at Mindawarra. They used to live in London because they were scientists for Spyforce. Linden is Aunty Eleanor and Uncle Ben's next door neighbour. He lives with his dad and often comes to Aunty Eleanor and Uncle Ben's house. Mr. Blue is the evil guy, who once worked at Spyforce. He wants to take over London and make a lot of money. These are the characters who are most mentioned in this book.


This book is one of the most best spy books I have ever read. It has grabbed me in by reading just the first few pages of the book. There are many more 'Max Remy Superspy' books. This book is definitely recommended to readers who like adventures and like to read thick books. I think this is an excellent book to read, so I give it 10 out of 10 stars! 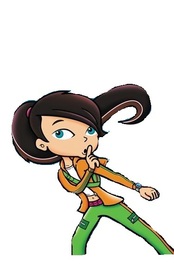